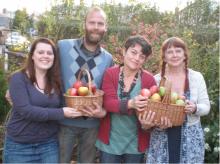 We're a co-operatively-run Community Interest Company based in and around Durham City. Having established in 2012, we use surplus free local fruit and produce a seasonal range of products including fruit juices, chutneys, cordials and jams. We also provide year round garden, tree care and propagation services and training, skill-sharing and information workshops on tree care, garden design, cookery and woodcraft skills to groups and individuals in the community. We hope to run small festivals such as an annual strawberry fair and a wassailing orchard celebration. This autumn we're running a Together We Can day with the help of the Co-operative Group. Co-operative members will help to make Durham more fruitful by helping to harvest the huge surplus of fruit that would otherwise go to waste. As as social enterprise, we hope to work with the Local Authority to support implementation of health and well-being targets and aim to increase access to fresh fruit products in local communities through the development of community food projects. Fruitful Durham is made up of four directors, who are all members of Transition Durham's Fruit Group.

Durham Fruit Group members have been mapping existing fruit trees onto an open-access GoogleMap. In 2011 half a tonne of surplus apples was harvested, pressed and sold as fruit juice at three local events. Fruitful Durham was formed to develop this unique project into a business which we plan to develop in line with ethical, social, environmental and economic principles and fair shares for all. Inspired by Permaculture and Transition principles, we aim to increase community resilience and prepare for resource depletion and economic instability. Our vision, together with Durham Fruit Group, is a fruit tree for every resident of Durham, through the mass planting of fruit trees in publically accessible spaces.

Purchased another picker and a hook from Wolf. The hook actually was probably more handy for picks using shaking techniques.

Also bought a fruit press and dehydrator with some money from Budgen's Pennies for Plastic, in collaboration with Kentish Town Transition Town.

We connected with a local school and church community. Gave a short announcement during a Sunday service about contributing to their Harvest Festival. Presenting the idea of fruit harvesting and related activities led to discovering several new very significant trees afterward.

A number of activities were aimed at the annual Belsize Green Fair. We did some significant harvesting sessions before it and built up a stash. A shed that was bought for a Community Supported Agriculture veg bag scheme also proved very helpful for short-term apple storage. Some excellent marketing material was produced including a flyer highlighting the actions we wanted people to get involved with around fruit.

One of our members produced a large scale map of Belsize with fruit icons showing all the known trees. This was displayed at the Green Fair. We had a large stall running apple pressing during the afternoon. Also jam-making, selling jars of jam and giving away samples of dried apples and fruit leathers.

The 2nd main event was joining with the church Harvest Festival. Again a large amount of juicing was in action and "apple mojitos" made an appearance :-)

Throughout autumn 2011 Abundance London picked over a tonne and a half of fruit that would have gone to waste, we organised at least 7 picking outings per week through September alone for local schools and volunteers. Little teams from six local schools trotted off to local gardens to help people with their over-flowing trees. We had brilliant comments from the kids about what fun it was, and how they now knew how to pick fruit, and from tree owners about how nice the kids were and how happy they were that the fruit was going to a good place. For us it was not only a mind-blowing logistical enterprise, matching trees, with kids, with catchment areas, with school and work timetables, with equipment logistics... but also quite a physically strenuous month. We were caught on the hop when the apple season started in mid-August, with the restaurants very quiet, the schools on holiday, and us also on holiday!

Throughout the area, people were busy making chutneys, cakes, jams and - especially - quince cheese. We suffered greatly during what came to be known as the Great Quince Saga, and suffice it to say, we probably won’t be making it again.

We made a profit on the Abundance Fruit Festival, so we have now paid off our fruit press, scratter, apple pickers, bike trailer, jars, bottles and all the other equipment we have needed (phew!). We also have a small reserve fund now, which we will be using to support environmental projects in the area, especially in the participating schools.

Next weekend we are planting up an Edible Playground at Dukes Meadows, an area where we have already helped to establish an orchard, and wildflower meadow.

In 2011 we picked 1.5 tons of mostly pears and apples on 34 picks, compared with 936kg on 24 picks last year. Loquats were a new fruit and we hope to still pick medlars.

43 people took part from a mailing list of 150, compared with 35 people last year. We gave the fruit to a wider range of organisations particularly around mental health and learning disabilities. We put more effort into this because fruit ripened before schools opened and schools were less interested. 3 shops agreed to sell our fruit but it was somehow hard to get them the right grade fruit to make this happen.

Several groups took part or expressed interest in harvesting with us, which was a highlight of the year. For example, PIP, a learning disability charity for older teenagers harvested with us and then made chutney to sell at a market. Our fruit also went to Rubies in the Rubble in Kings Cross and two Jewish New Year celebrations.

We held 3 jam and chutney workshops for about 20 people in a local school making about 120 jars and they were popular and enjoyed but hard work being 6 or 7 hour days. We also had a publicity push for finding local jam and chutney makers aiming to create a virtual jam factory, use up fruit and churn out jars for sale / awareness raising. One brownie pack and a couple of individuals took up the offer.

We lent the picking tool out more, through our local library (7 times) and by word of mouth (5 times). The fruit press was very well used this year – 10 times in all, 5 by ourselves and 5 times by 3 organisations including schools. We got very good feedback from that. We focussed less on quantity of juice this year and more on involving the public, demonstrating the process and giving free tastes, which worked well, was more flexible and relaxed, needing fewer people.

Pruning training was popular in the winter again with 12 people trained here and another 12 in neighbouring Mapesbury.

A highlight of the year was planting 45 dwarf apple trees in a group of town houses on South Kilburn housing estate.. Brent Council approached us with funding to do this project and we were able to pay people. I was surprised by the high level of interest in trees – 44 out of 66 eligible properties took up the offer- as these houses have very small and often paved gardens. We followed up with training on looking after trees and harvested and made juice from a large nuisance apple tree in the area with the local residents group. We also finally harvested crab apples from nearby streets, harvesting 70kg of an estimated 750kg. We made jelly and gave some to the houses facing the trees.

Another highlight was making apple juice in a busy spot outside Argos on Kilburn High Road, which was very popular with passers by. Together with the activities in South Kilburn this means we’ve covered every part of our patch and including the less leafy areas.

This year 4 people led harvests, following a training session and we want to increase the number of harvest leaders again next year. For the group to be sustainable we need to continue to spread the organising and leading work. We have helped with a few picks in neighbouring Willesden, who have started a Transition initiative this year. One of these involved storing a quantity of apples to make into a hot punch for the ‘Willesden Green Wassail’ in the new year – a local event now in its third year.

We are deliberately not promoting the scheme too widely so as to be able to match our capacity and had to turn a few more trees down this year. On the other hand, we raised awareness with plenty of coverage in the local press without obviously increasing demands. We got some great photos this year from a keen local professional, Jonathan Goldberg, who also produced a lovely film of the group in action (see resources section). Generally media interest was higher.

· Be more aware of health and safety – particularly the telescopic pole hitting someone on the head, and hygiene and safety when making fruit juice.

· We sold some fruit but it was quite hard to make this work.

· We struggled to find enough pickers for some harvests this year

· Previously we’ve organised a use for the fruit in advance and distributed direct from every harvest. This year we were more relaxed and stored fruit for the first time and then found a home for it. This worked well.

Possibilities for next year include making cider, increase contacts with schools; try to distribute through charity shops; get better designed signs and publicity material such as photos on a banner; promote picks for the many people on our email list who’ve not yet picked with us.

Some of the trees were very prolific and we collected 156 kg from one apple tree alone. The fruit went to local schools, community cafes and Cricklewood Homeless Concern, and also to our sister group in Kilburn for apple-pressing events.

The first picks came earlier than last year, in August, before the schools returned. Some of the volunteers who had done a council-funded fruit tree pruning course in 2010 were again able to prune some overgrown trees, hopefully encouraging these to produce more fruit next year.

+Minimum number for a picking group if it’s important to keep records: 6, with at least one climber for tall trees. If you’re not weighing, etc, then 5.

+Basic advice about sensible clothing & footwear necessary each time – not all volunteers are used to gardening!

+Useful to do a reccie to ascertain what equipment is needed, and the amount of fruit expected.

+Distribution: At the start of the harvesting schools weren’t open and we had to find other outlets. One community café which is a sponsor of Mapesbury’s Open Gardens Day was very appreciative and made some of the pears into chutney.

We used tarpaulins and long-handled picking tools – the former were useful for hard fruit that did not bruise when shaken down, the latter better for ripe fruit. We hooked plastic carrier bags of fruit on a suitcase-weighing gadget to find out how much was picked.

Support from The London Orchard Project and full Ealing Council sign off to take over Walmer Gardens Orchard and renovate. We are working with Ealing Transition as they are also using the Orchard for their first beehive. Work starts in January 2012 to clear and run pruning workshops.

We were much more accurate with our picking and measuring this year - overall we picked around 1.5 metric tonnes of fruit.

We managed to meet all requests to pick from private locations.

We identified suitable kitchen facilities to run jam/chutney making workshops that we will fully utilise in 2012. We did run workshops in conjunction with Ealing Transition events that went well.

Increased the number of fairs/carnivals we attended and therefore made more money! Around £2k this year.

Increase our volunteer base by actively engaging with them and ensuring they are regularly communicated to and updated with what's going on, as well as meeting on a regular basis.